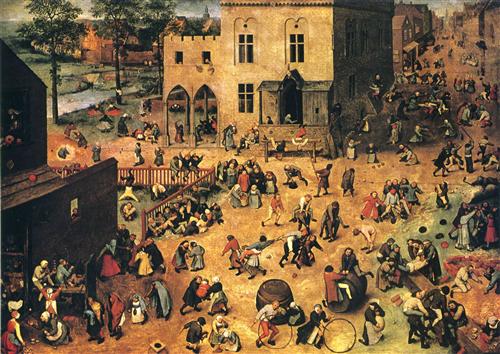 …and a little child will lead them.

It’s the simple moments. It’s playing hide-and-seek. It’s pretending that what isn’t is.

Like a game made-up as we go, with only a single rule: It has to make us laugh.

But not the kind of laughter that hurts anyone or anything. No, it has to be true laughter, the kind that comes from and through kindness, through truly wanting to be with one another—so much so that we’ll make up just about any old game, just as long as we wont have to go our separate ways.

“Life” then becomes one big beautiful “excuse” to stay together, and our “actions” take on a tremendously meaningful fashion. They become like soft pieces of colorful clothing gently placed upon our joy-filled affections.

Little children know this through and through. They’re constantly changing and tailoring their “clothes”, adapting and accessorizing as they go, with only one goal in mind: for the “fun” to continue. But the fun they seek is not the kind that you and I normally desire—for little children know what few adults remember. They’re not so easily tricked. They know that fun, true fun, has very little to do with the actual game being played, in and of itself. For little children it’s all about what the game, as a mere instrument, allows them to experience—the freedom to let out love.

That’s why the type of game they play can turn on a dime. It just doesn’t matter.

Are we “laughing”? Are we having “fun”? Are we still “with each other”?

Are we still in love?

These are the only questions that matter to a small child!

And with prayer it is much the same. Saints make up all kinds of “games” in order to “excuse” the time that they want so desperately to spend with God. They play all kinds of little games. They slide beads, they sing little songs, they pretend to be statues while playing hide-and-seek with the Lord, and some—the ones that the world most often calls crazy—even dream up little tales and fanciful stories, imagining along with God what could be if only everyone in the world would join in and play together.

But this is no big secret. All saints in one way or another come to say the same thing: Every technique, every approach, every means of entering into prayer…each and every one…they’re all part of one giant “excuse”, one seemingly never-ending “game”. For at the end of the day, techniques and approaches are at best a mere prelude to divine laughter—that infant-like sound composed of pure joy, that only the Love of God can bring into being.

3 thoughts on “Friday Thoughts: Playing Around”