St. Cyril of Jerusalem (313-386), whose feast is celebrated March 18th, was bishop of Jerusalem when the Holy Land was a center for Christian pilgrims. Scholars, like St. Jerome and St. Paula, came to pray and study at the places where Jesus was born and died and rose again.

The church in Jerusalem influenced liturgical, catechetical and devotional life in churches throughout the world. The Stations of the Cross originated here. Cyril’s honored as a Doctor of the Church.

Cyril preached and celebrated the liturgy in the Church of the Holy Sepulcher, built by the Emperor Constantine over the tomb of Jesus and calvary where he died. It still stands there today.

Here’s an excerpt from one of his catechetical sermons, preached in the Church of the Holy Sepulcher, near where the relic of the cross and the tomb of Jesus were honored.

“The Catholic Church glories in every deed of Christ. Her supreme glory, however, is the cross. Well aware of this, Paul says: God forbid that I glory in anything but the cross of our Lord Jesus Christ!

“At Siloam, there was a sense of wonder, and rightly so: a man born blind recovered his sight. But of what importance is this, when there are so many blind people in the world? Lazarus rose from the dead, but even this affected only Lazarus: what of those countless numbers who have died because of their sins? Those miraculous loaves fed five thousand people; yet this is a small number compared to those all over the world who were starved by ignorance. After eighteen years a woman was freed from the bondage of Satan; but are we not all shackled by the chains of our own sins?

“For us all, however, the cross is the crown of victory. It has brought light to those blinded by ignorance. It has released those enslaved by sin. Indeed, it has redeemed the whole of mankind!”

The relic of the cross honored by Cyril in this church was not just a grim reminder of the suffering of Jesus; it was bathed in the glorious memory  of Jesus’ resurrection celebrated close by in his empty tomb.

Right down the street from where I’m staying these days–in Bethany–is the traditional tomb of Lazarus. Jesus raised Lazarus from the dead, you remember, and stories of that famous incident and other events from Bethany figure large in the New Testament.

I went over to the Franciscan bookstore near the Joppa Gate this morning and got a small book on Bethany which goes into the history of this tomb and what archeologists have found as they dig and dig. Actually, they have stopped digging–for the present.

Surely, like the tomb of Jesus, the tomb of Lazarus would be remembered. Egeria, the 4th century nun, who was to all these places, says that there were so many people at Lazarus’ tomb  when she was there that they packed the whole church and all the fields around. For Christian pilgrims Lazarus played a vital part in the story of Jesus.

Right now, the Franciscans, the Greek Orthodox and the Muslims (who venerate Lazarus, by the way) are all around his tomb together. It looks like the same war over turf that goes on at the Church of the Holy Sepulcher.

Raising Lazarus from the dead was the final sign God gave before raising Jesus from the dead, John’s gospel says. It’s a miracle telling us we shall share in his resurrection.

Political reasons weren’t the only thing that brought Jesus to his death, it was his claim to be the way, the truth and life. The miracle brought people from Jerusalem to see a man who came from the dead and the one who raised him. The authorities reckoned that Lazarus would have to be taken care of too.

The believers were here in Bethany; not many in the temple, according to John’s gospel. Like Martha, carrying her pots and pans, they believed he was the Messiah, the Son of the Living God, who  brings life to the whole world. That’s why Bethany, and Lazarus, are important. 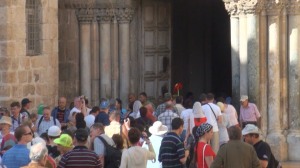 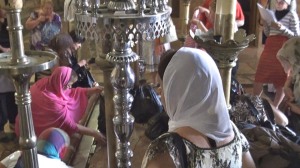 I spent today at the Church of the Holy Sepulcher, watching the crowds pile into the dark church and sat for some time in “Adam’s Cave” next to Calvary on a bench looking at the exposed rock where the crucifixion took place.  A stuffy guide came in with two Englishmen and said, “Look at that fellow over there, he’s sitting on the tomb of Baldwin 1, one of the first Crusader rulers of Jerusalem and doesn’t even know it.” I went back and looked up Jerome Murphy O’Connor who says the Greeks removed that tomb in 1809.

So much for experts.