St. Gregory the Great  is one the greatest of the popes. He held the church together during Rome’s free fall into poverty in the 6th century, one of the city’s worst periods. Not only did Gregory help the church survive, he also initiated her expansion into England and the barbarian lands to the north.

I lived across the street from Gregory’s home on the Celian Hill for a few years. On my way to school, I used to peek through the doors of the library of Pope Agapitus, a relative of Gregory’s, where archeologists were working. At some point, barbarian armies must have plundered that place on their sweep through the city.  Yes, Gregory and his family stayed on when most of his neighbors left Rome for safer parts.

Called to a job he didn’t want, Gregory kept his balance by reflecting on the scripture. His favorite book was the Book of Job. We would never know the greatness of Job, if suffering didn’t reveal it, Gregory said, so he looked to Job in hard times. Here are a few lines from his commentary on Job:

“Paul saw the riches of wisdom within himself though his outward body was corruptible, and so he says ‘ We have this treasure in earthen vessels.’

“ In Job, then, the earthen vessel was gaping sores, while an interior treasure remained unchanged. Gaping outward wounds did not stop the treasure of wisdom from welling up within and saying: ‘If we have received good things at the hand of the Lord, shall we not receive evil?’

“By good things Job means the good things given by God, both temporal and eternal; by evil he means the blows he presently suffers.

August 26th,  the Passionists remember one of their great missionaries, Blessed Dominic Barberi, born in Viterbo, Italy, in 1792. Early on, God inspired him to be a missionary to England.

The desire to work for Christian unity grew after Dominic entered the Passionist community, where he taught theology and was a spiritual director. In 1842 he went to England hoping to bring the English church and the Roman Catholic church together as one. Initially,  he tried to engage the leading religious scholars at Oxford in dialogue.

The Industrial Revolution was changing that country, however, and thousands of poor Catholic immigrants from Ireland were flocking to the great English factory towns, fleeing famine and looking for work. Priests were needed and Dominic, though he never spoke English well, tirelessly preached and ministered to them.

Dominic never got his wish to engage the learned scholars of England as a lecturer at Oxford, but he was noticed by them all the same. One of  England’s greatest intellectuals, John Henry Newman, was attracted to Dominic, not by the religious tracts he sent to him, but by his zeal and humility. Newman was looking for those qualities in the Roman church at the time.

“If they want to convert England,” Newman wrote earlier, “let them go barefoot into our manufacturing towns, let them preach to the people like St Francis Xavier–let them be pelted and trampled on, and I will own they do what we cannot…Let them use the proper arms of the Church and they will prove they are the Church.”

Dominic, humble, zealous and faithful, used “the proper arms of the Church.” When Newman decided to enter the Catholic Church, he asked for Father Dominic Barberi to receive him.

“All that I have suffered since I left Italy has been well compensated by this event,” Dominic wrote later, “ I hope the effects of such a conversion may be great.”

And they have been.

Writings of Blessed Dominic can be found here. 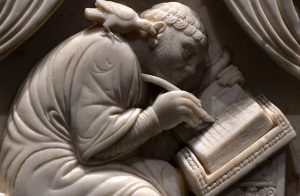 September 3rd is  the feast of St. Gregory the Great, many say the greatest of the popes. I’m sure he never thought of himself as great, he was too absorbed in the troubled times he lived in. Usually saints are recalled on the day of their death or martyrdom, but Gregory’s remembered the day he became pope, September 3, 590. That was a day of martyrdom for him.

Years ago, I lived across the street from Gregory’s home on the Celian Hill in Rome. On my way to school, I would peek through the ancient doors of the library of Pope Agapitus, a relative of Gregory’s, where archeologists were trying to learn about what was once the largest Christian library in Rome. Barbarian tribes later plundered the place on their regular sweeps through the city.

Those were bad times. Gregory was called from his monastery here on the Celian to become pope, but also to take charge of  a city under siege. He never was a healthy man and he never had much support. Most of Rome’s leading families fled to safer parts; the imperial government relocated in Milan. The burden of the city and the church fell on him.

Called to a job he didn’t want, Gregory drew wisdom and strength from the scriptures, especially from figures like Job and Paul the Apostle, who taught him that strength can come to weak “earthen vessels” like himself.

In his Commentary on Ezechiel, which we read in the Office of Readings, Gregory describes what he went through. Like Ezechiel, he was appointed a watchmen in the city, supposed to go up to the heights and see what’s coming, but “I’m not doing this very well, ” Gregory said.

“I do not preach as well as I should nor does my life follow the principles I preach so inadequately.
“I don’t deny my guilt, I get tired and negligent. Maybe by recognizing my failure I’ll win pardon from a sympathetic judge. When I lived in the monastery I was able to keep my tongue from idle topics and give my mind almost continually to prayer, but since taking on my shoulders the burden of pastoral care, I’m unable to keep recollected, with my mind on so many things.

“I have to consider questions affecting churches and monasteries and often I have to judge the lives and actions of individuals; I’m forced to take part in certain civil affairs, then I have to worry about barbarians attacking and wolves menacing the flock in my care; I have to do my political duty to support those who uphold the law; I have to put up patiently with thieves and then I have to confront them, in all charity.

“My mind is torn by all the things I have to think about. Then I have to put my mind on preaching. How can I do justice to this sacred ministry?

“Because of who I am I have to associate with all kinds of people and sometimes I say too much. But if I don’t talk to them the weaker kind of people wont come near me, and then we wont have them when we need them. So I have to listen to a lot of aimless chatter.

“But I’m also weak myself and I can get drawn into gossiping and then find myself saying the same things I didn’t care to listen to before.

“Who am I — what kind of watchman am I? I’m not standing on the heights, I’m in the depths of weakness. And yet the creator and redeemer of all can give me, unworthy though I am, the grace to see life as it is and power to speak effectively of it. It’s for love of him that I do not spare myself in preaching him.”

We have to admire Gregory, don’t we? He feels weak, but he’s a watchman looking out for his city and his church. Weakness doesn’t prevent him from serving or being far-sighted. From the Celian Hill Gregory sent monks to England, to the ends of the world, to found the church there. On his tomb in the Vatican is the simple inscription that describes him so well. “Servant of the servants of God.”

Today, Mother Theresa’s community lives on the land where Gregory’s home once was, on the Celian Hill, next to the ancient church of Saints John and Paul. They say Gregory took in 12 poor people for a meal almost every day. The poor are still taken care of where he once lived.

I hope to visit there in a few weeks.