Often Mark’s Gospel offers little clues to help us interpret one passage in the light of another. For example, Jesus is sharply questioned by the Pharisees whether it’s lawful for a husband to divorce his wife. The questioning takes place as Jesus “came into the district of Judea and across the Jordan,” on his way up to Jerusalem where he will meet his death.

Mark’s not altogether accurate in his geography but “Judea across the Jordan” was where John the Baptist was put to death for questioning the validity of Herod’s marriage to Herodias, who divorced Herod’s brother Philip to marry him. Mark tells that gruesome story a few chapters before in great detail. (Mark 6, 14-29) The site of John’s death, east of the Dead Sea in what is now the country of Jordan, was lost for more than a thousand years after it was destroyed by the Romans at the end of the First Jewish Revolt in 71/72 A.D. It was definitively identified in 1968, when a German scholar discovered the remains of a Roman siege wall. Since then, the Hungarian architect and archaeologist Dr Győző Vörös has been excavating the site.

Perhaps the Pharisees thought that questioning Jesus here might have two outcomes. Either it might incite Herodias and Herod to do to Jesus what they did to John, or if Jesus didn’t answer the delicate question about divorce, the crowds gathered around him might see him less brave than the Baptist.

Jesus’ answer is brave, and it’s not an abstract one. Marriage is not to satisfy human ambition, like Herodias’ ambition. From the beginning God willed that man and woman be one flesh. The final lines of our gospel, spoken at this time and place, is also a strong judgment on the man and woman who engineered John’s death:


Because Jesus is often called “Son of David” in the New Testament and so many of the psalms are attributed to David, we may tend to idealize the great king. David united the tribes of Israel and established a nation with its capitol in Jerusalem. Jesus himself appealed to David’s example when his enemies accused his hungry disciples of eating grain on the Sabbath.

Yet, the long narrative we read in the Book of Samuel today and tomorrow at Mass offers a darker picture of the famous king– he was a murderer and an adulterer. David had Urriah the Hittite, a faithful soldier in his army, killed so that he could have Bathsheba, his wife. (2 Samuel 11, 1-17)

Psalm 51 is the response we make at Mass after listening to the king’s sordid deed. Tradition says it’s David’s own response after he realized what he had done. The Book of Psalms calls Psalm 51: “A psalm of David when Nathan the prophet came to him after he had gone in to Bathsheba.”

“Have mercy on me, O God, in your goodness;
in the greatness of your compassion wipe out my offense.
Thoroughly wash me from my guilt
And of my sin cleanse me.”

The psalm, the first of the Seven Penitential Psalms, asks God to take away both the personal and social effects of our sin, for our sins do indeed have emotional, physical and social consequences. Only God can “wash away” our guilt and cleanse our heart. Only God can “rebuild” the walls that our sins have torn down and the lives they have harmed. Only God can restore joy to our spirits and help us “teach the wicked your ways, that sinners may return to you.” Only God can bring us back to his friendship.

In the scriptures, David is a complex figure– a saint and a sinner. He’s also a reflection of us all. That’s why our response in the psalm at Mass today takes the form that it does –

“Be merciful, O Lord, for we have sinned.”

Please watch today’s homily by selecting the video below: 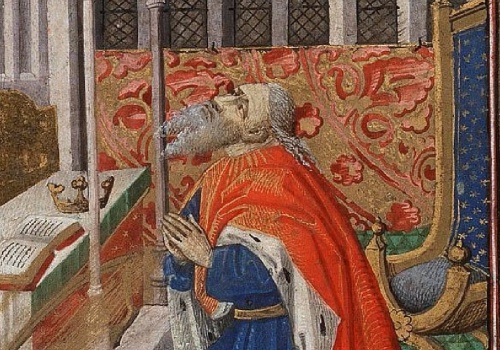 Matthew’s Gospel contains many indications of the Jewishness of Jesus. In today’s reading at Mass (Matthew 5, 17-37), we can see him as part of the Jewish world in which he lived. A loyal, practicing Jew, he participated fully in his religion and culture. He kept the Jewish feasts and observed the Jewish laws; he was in the synagogue every Sabbath.

Yet, Jesus was not uncritical of the Jewish world in which he lived. That’s what we hear in today’s gospel.

Some of his words seem harsh to us– “If your right eye causes you to sin, tear it out and throw it away…And if your right hand causes you to sin, cut it off and throw it away.” But this is Jesus speaking as the Jewish prophets spoke. They used harsh words to make their point. Like them, he spoke strongly when religious standards were neglected and not being fulfilled. “I came not to abolish the law or the prophets but to fulfill them.” His criticism extended to the Jewish leadership of his day– the scribes and Pharisees.

Jesus criticizes especially a way of living that focuses on externals–and sometimes just a few externals– and doesn’t focus enough on inner thinking and inner judgments. For example, he mentions a commandment “You shall not kill; and whoever kills will be liable to judgment.” But there are other ways you can destroy people. You may not go to jail for them either, but you can destroy people by anger or demean them by looking at them as fools. Strong words, but he’s making a point and his point isn’t just for his time and place.

“ ‘You shall not commit adultery.’ But I say to you, everyone who looks at a woman with lust has already committed adultery with her in his heart.” Again, you may not go to jail for your thinking, but your thoughts can poison your appreciation of people. I think that’s what pornography does. It poisons your mind and lessens your respect for others.

By the way, that picture above is King David. You know where his thoughts got him.

The final parts of our gospel are about divorce procedures and taking oaths. Some people in his time loved to see life in terms of law; some today still do. All you have to do is keep within the law, be law abiding, live legally and that’s enough. As we see in this gospel, Jesus never saw keeping laws enough. They’re just a start.