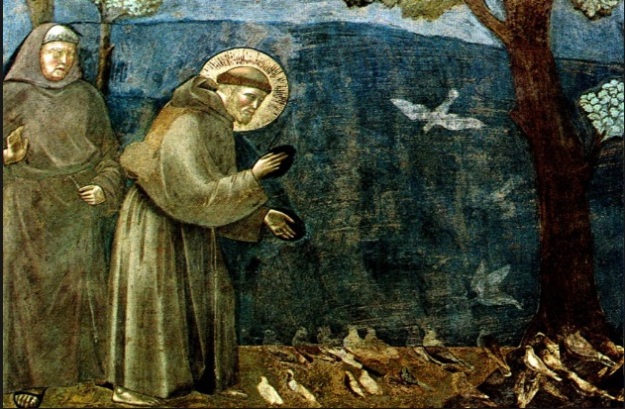 St. Francis is one of those super saints  to keep in mind, even after his feast day. I mentioned in a previous blog the statue of Francis facing St. John Lateran and Pope Innocent’s dream of a young man who, like Francis, held up the church’s walls ready to fall.  Francis helped renew the church.

In his encyclical Laudato Si, Pope Francis paints a verbal picture of Francis, holding his arms out to the created world, caring for our endangered planet:

“I believe that Saint Francis is the example par excellence of care for the vulnerable and of an integral ecology lived out joyfully and authentically. He is the patron saint of all who study and work in the area of ecology, and he is also much loved by non-Christians. He was particularly concerned for God’s creation and for the poor and outcast. He loved, and was deeply loved for his joy, his generous self-giving, his openheartedness. He was a mystic and a pilgrim who lived in simplicity and in wonderful harmony with God, with others, with nature and with himself. He shows us just how inseparable the bond is between concern for nature, justice for the poor, commitment to society, and interior peace.

“Francis helps us to see that an integral ecology calls for openness to categories which transcend the language of mathematics and biology, and take us to the heart of what it is to be human. Just as happens when we fall in love with someone, whenever he would gaze at the sun, the moon or the smallest of animals, he burst into song, drawing all other creatures into his praise. He communed with all creation, even preaching to the flowers, inviting them “to praise the Lord, just as if they were endowed with reason”.

“His response to the world around him was so much more than intellectual appreciation or economic calculus, for to him each and every creature was a sister united to him by bonds of affection. That is why he felt called to care for all that exists. His disciple Saint Bonaventure tells us that, “from a reflection on the primary source of all things, filled with even more abundant piety, he would call creatures, no matter how small, by the name of ‘brother’ or ‘sister’”. Such a conviction cannot be written off as naive romanticism, for it affects the choices which determine our behaviour.

“If we approach nature and the environment without this openness to awe and wonder, if we no longer speak the language of fraternity and beauty in our relationship with the world, our attitude will be that of masters, consumers, ruthless exploiters, unable to set limits on their immediate needs. By contrast, if we feel intimately united with all that exists, then sobriety and care will well up spontaneously. The poverty and austerity of Saint Francis were no mere veneer of asceticism, but something much more radical: a refusal to turn reality into an object simply to be used and controlled.

What is more, Saint Francis, faithful to Scripture, invites us to see nature as a magnificent book in which God speaks to us and grants us a glimpse of his infinite beauty and goodness. “Through the greatness and the beauty of creatures one comes to know by analogy their maker” (Wis 13:5); indeed, “his eternal power and divinity have been made known through his works since the creation of the world” (Rom 1:20). For this reason, Francis asked that part of the friary garden always be left untouched, so that wild flowers and herbs could grow there, and those who saw them could raise their minds to God, the Creator of such beauty. Rather than a problem to be solved, the world is a joyful mystery to be contemplated with gladness and praise.”

I like the pope’s words: “Rather than a problem to be solved, the world is a joyful mystery to be contemplated with gladness and praise.”

1 thought on “Caring for Creation”