A few days ago we celebrated the feast of St. Jerome, the great 4th century scripture scholar and controversialist. I’ll be staying through October in a place well known to him in Rome– the Caelian Hill and the church of Saints John and Paul.

In Jerome’s day Rome’s rich and powerful lived on the Caelian Hill, across from the Palatine Hill and the Roman forum. Jerome had prominent friends among them. Pammachius, the ex- Roman senator who built Saints John and Paul, the noblewoman Paula and her daughter Eutochium, who later joined Jerome in his venture in Bethlehem to study the scriptures, her other daughter Blaesilla and others.

Interest in the scriptures ran high among well-off Caelian Christians then, but they also were keen for gossip and religious controversies. Jerome loved the scriptures, but he also loved the fight. His relationship with Paula and her family was part of the gossip that  probably figured among the reasons he left Rome for the Holy Land. Following him there, Paula created a monastic community in Bethlehem and she and her daughter undoubtedly played  a bigger part in Jerome’s scriptural achievements than they’re credited for.

Jerome’s a saint, but I appreciate why so many artists picture him doing penance for his sins. He needed God’s mercy. 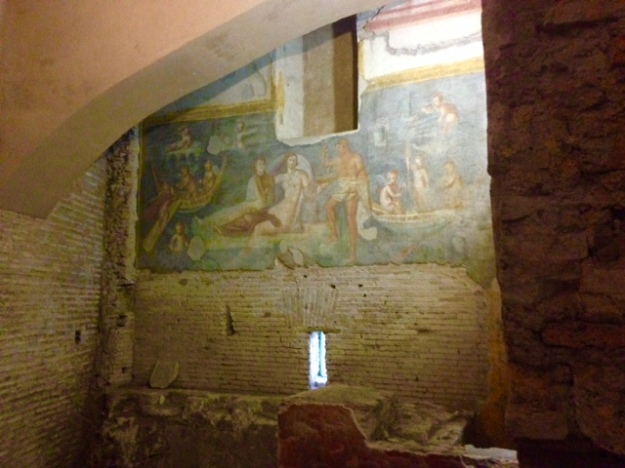 Underneath Pammachius’ Church of Saints John and Paul are remains of Roman apartments going back to the 2nd-4th centuries, probably the best preserved of their kind in the city and a favorite for tourists.

Years ago, when I studied here, one of the rooms in the excavations was pointed out as part of a house church with Christian inscriptions , now archeologists are not so sure.. That doesn’t mean Christians didn’t meet or worship in these buildings, only they didn’t create a special liturgical space for meeting or worship.  Christian evidence, however, says a “house church” was here early on.

Why then did Pammachius in the fourth century build the imposing basilica of Saints John and Paul here on the edge of the Coelian Hill facing the Palatine Hill and the Roman forum ? Many retired soldiers settled on the Caelian Hill then. Did he wish to win them to Christianity through the example of two soldier saints, John and Paul, who were honored in this church? Their remains are still found under the church’s main altar today.

Is there another reason? According to Richard Krautheimer, an expert on Rome’s early Christian churches, the emperor Constantine built St. John Lateran, St. Peter, St. Paul, St. Lawrence, the first Christian churches, on the edge of the city most likely in deference to the sensibilities of the followers of Rome’s traditional religions. He didn’t want any Christian church in the “show areas” of the city, near the Roman forum or the Palatine hill.

By Pammachius’ time Christianity was more assertive. Was Pammachius’ church a statement to the city that Christianity had arrived and wished to speak its wisdom here at the heart of traditional Roman religion, near the Palatine Hill and the Roman forum? Jerome’s new translations and commentaries, along with the works of St. Augustine and others, gave them something to say.

So was this a church with a mission? A lesson for the church of today? Speak to the world of your time. 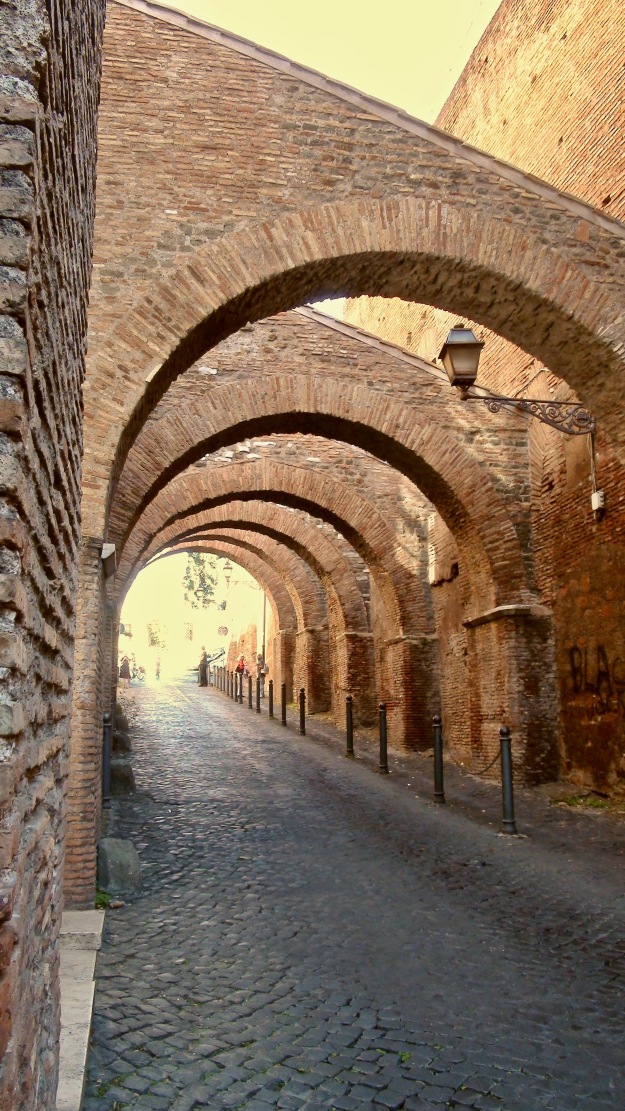 1 thought on “A Church with a Mission”