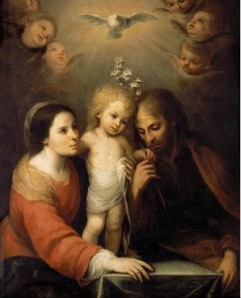 “This is how the birth of Jesus Christ came about,” today’s reading from Matthew’s gospel begins. He describes it through the experience of Joseph, the husband of Mary. Matthew’s account is summarized in the creed. “I believe in Jesus Christ, the only-begotten Son of God…who by the Holy Spirit was incarnate of the Virgin Mary.”

“The answer is an unequivocal yes. Karl Barth pointed out that there are two moments in the story of Jesus when God intervenes directly in the material world: the virgin birth and the resurrection from the tomb, in which Jesus did not remain, nor see corruption.

“These two moments are a scandal to the modern spirit. God is “allowed” to act in ideas and thoughts, in the spiritual domain–but not in the material. That is shocking. He does not belong there. But that is precisely the point. God is God and he does not operate merely on the level of ideas. In that sense, what is at stake in both of these moments is God’s very godhead. The question that they raise is: does matter also belong to him?

“Naturally we may not ascribe to God anything nonsensical or irrational, or anything that contradicts his creation. But here we are not dealing with the irrational or contradictory, but precisely with God’s creative power, embracing the whole of being. In that sense, these two moments – the virgin birth and the real resurrection from the tomb–are the cornerstones of faith.

“If God does not have the power over matter then he is simply not God. But he does have this power, and through the conception and resurrection of Jesus Christ he has ushered in a new creation. So as the Creator he is also our Redeemer. Hence the conception and birth of Jesus Christ from the Virgin Mary is a fundamental element of our faith and a radiant sign of hope.”

Artists early on pictured Joseph with his head in his hands, listening in sleep to the angel’s message. In a dream later he heard the angel telling him to take the child and his mother to Egypt to escape Herod, the king. He was a man of great faith.

The medieval artist who painted the picture below has Mary pointing to Joseph as a witness to whose Child this is who’s’ born in a stable. They are the first to believe and they will care for Jesus with all the love and care they can give him.

Joseph has his hand on his head, as he does in so many portrayals of him. The angel spoke to him in dreams. Faith is like a dream where God speaks to us in another way.

O Leader of the House of Israel,
giver of the Law to Moses on Sinai:
come to rescue us with your mighty power!

The gospels for the days until Christmas are from St. Luke, recalling the angel’s visit to Mary and her relative Zechariah. Matthew’s gospel will be read again after the birth of the Child, when Joseph will warned of danger and takes the Child and Mary to Egypt and then to Nazareth..