There’s not much said about the apostles in the New Testament; they walk in the shadow of Jesus. Because of that, we have only a few details about Andrew, the brother of Peter, whose feast is today.

One detail is his name, Andrew, a Greek name, which may be due to the fact that the area around the Sea of Galilee was multi-cultural and Jewish families sometimes took gentile names.  His family was from Bethsaida where a lot of trade went on. Did Andrew speak some Greek?

Maybe he did, because later in John’s gospel he and Philip bring some Greek pilgrims to Jesus before his death. Jesus sees their coming as a sign of his approaching passion and glorification and he rejoices. (John 12, 20-28) We have to be careful of seeing Jesus’ apostles as poor uneducated fishermen, not likely to get along in a bigger world.

Andrew must have been religious. Early in John’s gospel, he’s described as a disciple of John the Baptist who points Jesus out to him. Jesus then invites Andrew and another disciple to stay for a day with him. “Come and see.” Afterwards, Andrew “found his brother Simon and said to him ‘We have found the Messiah.’” (John 1,35-41)

The Greek Church honors Andrew as its patron and considers him the first apostle because he was the first to see Jesus and follow him; then he called his brother. Tradition says Andrew was crucified on the beach at Patras in Greece and during his martyrdom extolled the mystery of the Cross of Jesus. He’s also the patron of Russia and Scotland.

A number of saints and feasts are celebrated during Advent. Certainly, saints like Andrew belong in our celebration of the Incarnation.  Jesus, the Incarnate Word, drew people to himself who, in turn, drew others. His grace can’t be contained.

You wish they would read it instead of looking for a headline. I mean the pope’s new book “Jesus of Nazareth, the Infancy Narratives”  Image Books, 2012. From the headlines the last few days you would think all the pope said was that the ox and the donkey weren’t around the manger at Christ’s birth, and he’s joining others who question the historical reliability of this event.

The contrary is true. As in his previous books on Jesus of Nazareth, Pope Benedict engages what modern scriptural scholarship says about this section of the gospels. (True, he depends on German and French scholarship for the most part) But if anything, the pope sees a swing from not accepting a history behind the infancy narratives to a recognition of historical facts.

But he does more than affirm history. He sees meaning behind the facts. So the manger of Jesus to him is the Lord’s first throne, the humble temple where he comes to feed the poorest of the world.

“So the manger has in some sense become the Ark of the Covenant, in which God is mysteriously hidden among men, and before which the time has come for ‘ox and ass’–humanity made up of Jews and Gentiles–to acknowledge God.”

I downloaded the book yesterday. A good book to read in Advent. Here’s a theologian and mystic at work. I think his three volumes on Jesus of Nazareth will stand as his lasting contribution to the church. 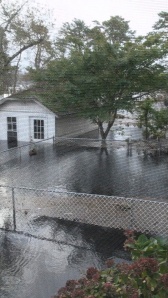 The floodwaters of Noah’s time that Jesus speaks of in Friday’s gospel (Luke 17, 26-37) evoke some vivid memories for some of us of the surging waters we experienced when Hurricane Sandy struck our shores recently in the northeast part of the United States. A disaster like that changes your  life and the world around you instantly.  Natural disasters show how impermanent life is.

The images Jesus uses in this passage from Luke’s gospel catch vividly what happens in a catastrophe like Sandy. We can’t believe life changes and something like a storm will cancel our next meal, or a scheduled party, or a regular talk with a friends or our family on a cell phone. We shrug off the danger: everything will be the same–till the flood comes and the lights go out and the phone goes dead and water, food and shelter are taken away.

We like what we have and what we’re used to it. But we don’t have it forever. If you want to survive when a storm comes you have to give up things. Like Noah, you have to head for the ark; it’s the only thing that promises to save your life.  Like Lot’s wife, you can’t look back; you have to go forward or you’ll end up destroyed.

So the message of Jesus is clear. Look to God, our stronghold and our life. Place your trust in God, who gave you the gift of life, and will give you greater life if you give yourself to him.

I’m rereading a book by one of the leading theologians at Vatican II, Yves Congar, OP called “The Mystery of the Temple, Newman Press, Westminster, Maryland 1962.” As I noted in a previous blog, Congar wrote out of his experience of increasing secularization in France in the 1950s. People were abandoning God and the church.

These sentences struck me: “We are always tempted to confine ourselves to what we see and touch, to be satisfied with this and to think that a preliminary achievement fulfills God’s promise.”

Abraham thought God’s promise was fulfilled in Ismael, Joshua thought it was the conquest of Canaan. Solomon thought it was in his immediate descendants…”but these promises were capable of more complete fulfillment which would only materialize after long periods of waiting and urgently needed purification. Only the prophets–and this, in fact, is their task–draw attention to the process of development from seminal promises and to the progress of the latter towards their accomplishment through successive stages of fulfillment continuously transcending one another.”  (p 31-32)

We may look at the church or our world at this time and think it’s the end, but it isn’t.  It’s only a “preliminary achievement” in God’s plan. We need prophets to “draw attention to the process of development from seminal promises” by successive stages of fulfillment.

God is the Pillar of Cloud leading us on, Emmanuel, God with us. “It ain’t over till its over.”

Natural disasters like Sandy, the hurricane that struck the east coast of the United States, Haiti, Jamaica, Cuba and other nations of the Carribean provoke the question: Where is God in all of this? “It’s a wake-up call,” a woman ahead of me at the polling booth on election day said.

Jesus said the same thing when he spoke of a falling tower that killed 18 people in Siloam. (Luke 13,4-5)  Natural disasters are part of the “signs of the times” that call us to repent.

They keep us real about life. The storm surge from Hurricane Sandy came in from the ocean and hit my sister’s house in Lake Como, NJ, around 9:30 PM, Monday evening, October 29th, 2012. Power had gone off around 5PM. I heard what I thought was a clap of thunder, but actually it was part of the foundation of the house under the bedroom where I was sleeping falling down before the surge of water. Looking out the back window I could see waves of waters breaking against the house and I could hear driving winds shaking the trees.

In the front of the house facing the street I could see the surge of water breaking over my sister’s car parked in the driveway. The waters came up to the first step on the porch of her house and then stopped. In the dark I couldn’t see anything beyond what was lit by a small flashlight.

The next day the waters subsided and you could see fish from Lake Como jumping in the streams of water on the street. Outside my bedroom window I saw a heron diving for fish in the waters in our backyard.

Most of the people on 21st Street stayed through the storm; a number of them had generators. They were out on the streets the next day cleaning up and assessing the damage which along the Jersey Shore must be in the millions of dollars. They were thankful to be alive. My sister abandoned the house.

There was kindness that day. Dave from down the street came with two cups of coffee. Richie from across the street pushed my sister’s car from the watery driveway to a higher part of the street. Bill and Joe tried to get her car started but to no avail. Susan and Bob came to drive her to a friend’s house and me to the rectory.

There were offers of food, shelter, showers. Cell phones were charged, water was provided. So much was lost, but it also brought a sense of reality: “Naked I came into this world, and naked I shall return.”

Also, I could hear a favorite saying of my mother: “We got this far.”

Here’s a video of that storm: