Just read a review by Gary Wills of a book by Peter Brown about St. Augustine and other early saints. Augustine was someone who couldn’t live outside a community. He needed friends around him from his earliest years and later as a bishop lived in a community, because he appreciated  the help he got from others. It wasn’t that he needed an audience. He needed others to carry him along, to put up with him, because he was a sinner.

In a sermon in today’s liturgy of the hours, Augustine scolds the shepherds of the church for not befriending their flock. Their sheep want good pasture; they’re looking for healing. “You have failed to strengthen the weak,” the Lord says to them. They need shepherds, but do they also need friends?

Augustine turns to the  paralyzed man in the gospel. He needed friends to carry him to be healed, friends with faith in him, friends to bear his burden. They carry him up the roof and lower him down into the presence of Jesus. Yet, before Jesus says a word to the paralytic, did he hear from his friends, “Don’t be afraid?”

A number of us are going on a pilgrimage to Italy, October 17-27. I spoke about the trip to some of my companions a few days ago.

We’ll be soon on our pilgrimage to northern Italy and Rome. If you have access to the internet, look up the places we’ll be visiting–Venice, Padua, Siena, Florence, Lucca, Rome, Pompei. There’s a wealth of free information available,

But let me recommend some resources.  We’ll begin our pilgrimage in Venice, the ancient maritime republic on the Adriatic Sea. Like other small powerful maritime states– England, Holland and Portugal– Venice, which is now part of Italy, was once an independent global power skilled in using the sea. Even today, the region around Venice is economically better off than other regions of Italy, largely because of Venetian economic acumen.

For centuries, the Venetian republic was linked to the Byzantine and Muslim worlds through the sea and many of its treasures, like the relics of St. Mark, come from those parts of the world. Its buildings and its art are also strongly influenced by the building and art of its trading partners.

An excellent new book on the history of Venice,  (City of Fortune: How Venice Ruled the Seas,  by Robert Crowley,  2012) offers a vivid description of the part Venice played in the Crusades and its relations to the Muslim and Byzantine empires. It’s a history that can throw light on our relationship with the Middle East today.

The best commentary on the art of Venice and Padua I’ve found is John Ruskin’s, The Stones of Venice and Giotto and his Works in Padua, both available free at Apple’s iTunes on the internet. Ruskin has a beautiful description of the art in St. Mark’s Cathedral in Venice, one of the great wonders of the world. We’ll celebrate Mass in the cathedral begun in 976 after fire destroyed an earlier building.

Padua, once the capital of Venice and also its rival, is still one of Italy’s intellectual centers.  The brilliant Italian scientist Galileo Galilei, a towering figure of the scientific world, was born in the 17th century in Pisa, in Tuscany, and studied, taught and lectured in Pisa and Padua as well as in Florence, where he and his family made their home. He’s called the father of experimental science; his work in astronomy drew criticism from the church of his time and made him a symbol of the conflict between faith and science.

However, he was a deeply religious man, Catholic to the core. Two of his daughters entered the convent outside Florence and one of them, Sister Maria Celeste, carried on a long, tender correspondence with her brilliant father.

Galileo believed that nature was a teacher along with the bible, and he wanted the church to accept scientific knowledge, otherwise it could be called an enemy of truth and human progress. Like others then and now, he believed that the bible taught you how to go to heaven and not how the heavens go.

His story is beautifully and carefully told in a recent book:

(Galileo’s Daughter: A Historical Memoir of Science, Faith and Love, Dava Sobel,  New York 1999). There’s a television version:  Galileo: Battle for the Heavens, that you can find on Nova’s internet site.

I admire the author’s even-handed description of the relations between the scientist and the churchmen who condemned him for what they considered heretical ideas. “A tragic mutual incomprehension has been interpreted as the reflection of a fundamental opposition between science and faith, “ Pope John Paul said with regret   in 1992.

Saints also strengthen our hope for the future, so we’ll keep our eyes open for the saints in the cities we’re visiting. Anthony of Padua, Catherine of Siena, Fra Angelico of Florence. We’ll celebrate Mass in their shrines in Padua and Siena.

At Lucca we’ll visit the shrine of St. Gemma. (1878-1903} Lucca is a lovely old Italian city near the Mediterranean Sea. Gemma is an “Unsuccessful Saint,” a beautiful young woman of the 19th century who in one way never achieved her dreams, yet God touched her in ways deeper than she could have ever imagined. Her life contradicts so many visions of success that our society holds. We’re going to look into her world and her life. She’s a sign that God still raises up “the lowly.”

A friend of mine offered me some wonderful notes on life and times in Lucca in Gemma’s day. Among other interesting facts, Giacomo Puccini (1858-1924), the opera composer, was from Lucca. He composed “La Bohème” which premiered in 1896. “Although Puccini did not write an opera about Gemma, he was considered incomparable in delineating frail, simple heroines like her.”

Gemma seems so unlike Catherine of Siena (1347-1380), whose shrine we will visit in Siena. Named a “Doctor of the Church” in 1970, she’s the patron saint of Italy along with Francis of Assisi.  The “Black Death” claimed one third of the population of the cities of Italy during her lifetime, at the same time the church was sunk in scandals and corruption. Catherine wasn’t afraid to scold popes, bishops, priests and politicians, and by reconciling feuding Italian cities she sparked new life into the soul of Italy.

Saints have different missions and model God’s grace in different ways, and so both Catherine and Gemma exemplify how God’s grace works in us.

Here’s some material on Gemma. http://www.cptryon.org/compassion/75/gemma.html

On Catherine, there’s a fine interview with a Dominican writer at: http://www.youtube.com/watch?v=EvlA9FBAk24

In Rome we’ll visit St. Peter’s, of course, and also Pompei, where modern archeology got its start in the 18th century. There’s a novel by Paul Harris called “Pompei” that’s worth reading; a story of that city’s last days that’s carefully researched. We’ll say hello to the pope at his Wednesday audience and celebrate Mass in St. Peter’s.

We’re going to visit  the motherhouse of my community, the Passionists, while in Rome. Saints John and Paul is located in one of Rome’s oldest areas, on the Coelian Hill, not far from the Colosseum.  Nero’s gardens were here; much of the present monastery is built over the ruins of the Temple of Claudius, another Roman emperor.  Under the Church of Saints John and Paul are the remnants of a house where Christians met around the 4th century. Early Christian saints are buried here. It’s a tight squeeze to get a large group into the underground ruins, but I’ll see if we can get there. We’ll also visit the chapel that holds the remains of the founder of my own community, St. Paul of the Cross.

You get an overview on the Coelian Hill of the history of Rome and the Catholic church. Cardinal Egan, the retired archbishop of New York, is the titular head of this old Roman church.

I wrote about this place here. 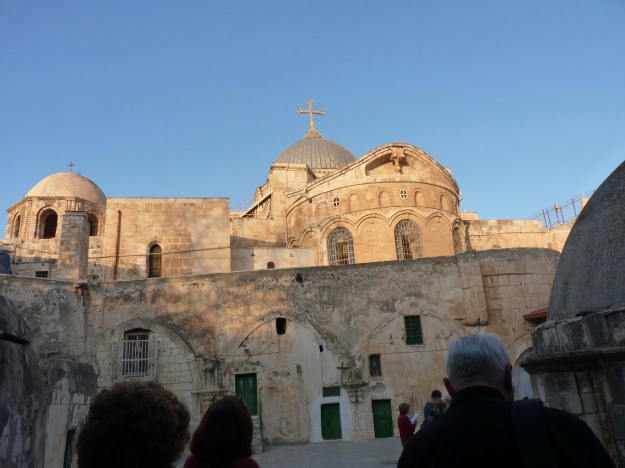 The feast we celebrate today  (September 14) originated in the 4th century in Jerusalem, the city where Jesus died and rose again. On September 13, 335 AD  an immense throng of Christians gathered to dedicate a church built by theEmperor Constantine over the empty tomb of Jesus and the place where he was crucified– Golgotha.

The resplendent church, one of the world’s largest, was called the Anastasis (Resurrection), or the Church of the Holy Sepulcher. Christian pilgrims from all over the world still flock to see where Jesus was buried and where he died.

Until the Moslem conquest of Jerusalem in the 7th century,  bishops, Christians from all over the Roman empire came here annually to celebrate the feast, which went on for 8 days. It was Holy Week and Easter in September. One visitor, Egeria, a widely-traveled 4th century nun, said the celebration recalled the Church’s dedication, but also the day when “the Cross of the Lord was found here.”

Many Christian denominations continue to celebrate the Feast of the Holy Cross on September 14th.

If you visit Jerusalem’s Old City today you’ll see a smaller, shabbier successor to Constantine’s great church, which was largely destroyed in 1009 AD by the insane Moslem caliph al-Hakim and was only half rebuilt in the 11th century by the Crusaders. Today the church bears the scars of sixteen centuries of wars, earthquakes, fires, and natural disasters.

The scars of a divided Christendom also appear in the church, where various Christian groups, upholding age-old rights, warily guard their own turf. Visitors have to wonder: Does this place proclaim the great mystery that unfolded here?

Here are some pictures of the great church.

Gloria Ziemienski kindly gave me a copy of her new book of poems the other day: There are Times:Pages from a Poet’s Journal. This is one of them.

I sit in the quiet, praying.

a name comes to my mind.

As I pray for her,

I’m reminded of someone

and my mind takes off in

which lead me toward

another someone or something,

until I gather my thoughts

and rein them all in,

trying to collect myself,

trying not to feel guilty

about my wandering mind.

Then I recall that St. Paul urges us

to pray without ceasing,

so I decide to take You with me

in my mind’s wanderings,

and offer you this day as my prayer.

There is no doubt that the poor find it easier than the rich to receive the blessing of humility; for gentleness goes with poverty just as pride more commonly goes with riches. Nevertheless,  many rich people find that their wealth does not swell them up with pride: rather, they do good and benevolent things with it. For these people the greatest treasure is what they spend in relieving the distress and hardship of others.

In the virtue of humility people of every kind and every standing meet together, because though they differ in their means they share a common purpose. Their inequality of wealth makes no difference if they are equal in spiritual blessings.
What kind of poverty, then, is blessed? The kind that is not in love with earthly things and does not seek worldly riches: the kind that longs to be filled with the blessings of heaven.
Pope Leo the Great